Jemma Reekie: “I just told myself I could do it”

Jemma Reekie: “I just told myself I could do it” 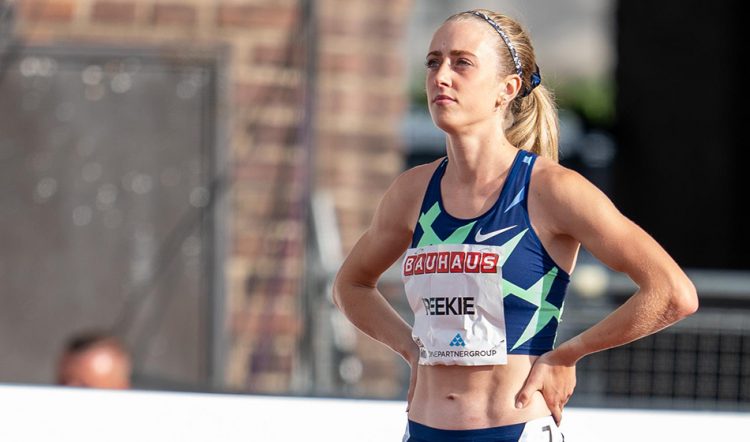 The British record-breaker on why self-belief is key Jemma Reekie was named joint winner of the Scottish performer of year title alongside Laura Muir and Jake Wightman just three years after winning the national junior award and says a key part of her progress has been having belief in herself. This year, during the indoor season, the 22-year-old broke three British records inside eight days, improving the UK best marks in the 800m, 1500m and mile. Her 1:57.91 800m was a world indoor lead and she also ran 1:58.63 outdoors. It came after a 2019 in which Reekie claimed double European under-23 gold and raced at the World Athletics Championships in Doha. “When I was a junior, I was really focused on being a good junior,” says the 2017 European under-20 1500m champion. “As soon as I wasn’t a junior any more I said to myself ‘I want to be a good senior and I want to be a good senior quick’. “Because I had been a good junior and I’d been up at the top, but I knew that it was going to be a process and a lot of hard work to get there. All these girls and guys at the top, they are working so hard to be there. “I think it was just the mindset. I just told myself I could do it. I feel like that is one of the main things – telling yourself you can do it. You can do anything you really put your mind to.” “I feel like that is one of the main things – telling yourself you can do it. You can do anything you really put your mind to” Things have not always been easy, however, and Reekie describes 2019 as “bittersweet”. “After last year, after Doha, I was really disappointed after my performance there (not getting through the heats),” explains the Andy Young-coached athlete. “It was bittersweet because I had had such a good season that year as well. I said to myself, I don’t want that to happen again. I wanted to come back stronger and faster. I put my head down and trained so hard.” Her 2020 season ended in September with a Rome Diamond League win just 48 hours after she clocked 1:58, which was only enough to finish fourth in a fast race in Switzerland. “In Switzerland I was a bit disappointed with my performance, even after running 1:58 – which if you told me last year, I would have been buzzing to run sub-2:00!” Reekie says. “Any time I’m disappointed I feel like the next race I do is even better than the one before. “It is good to practise getting loads of races done because when you get to big championships there are loads of round. So it was a real confidence boost that way as well, that I could come out less than 48 hours later and put out a good race.” So now, having had such a strong season, does she think other athletes will be more fearful of her in the future? “It’s hard to tell because I guess you don’t know what other athletes feel,” she says. “I think my presence is definitely there now and people are wondering what I am going to do because I have done a few different ways of racing races. “I guess I will be a wee bit more well-known on the start line.”
https://www.youtube.com/embed/QvEDwkxgWeM?feature=oembed
Lead photo by Chris Cooper » For more on the latest athletics news, athletics events coverage and athletics updates, check out the [url=https://athleticsweekly.com/]AW homepage[/url] and our social media channels on [url=https://twitter.com/AthleticsWeekly]Twitter[/url], [url=https://www.facebook.com/athleticsweekly/]Facebook[/url] and [url=https://www.instagram.com/athletics.weekly/]Instagram[/url] The post [url=https://athleticsweekly.com/athletics-news/jemma-reekie-told-myself-i-could-do-it-1039936735/]Jemma Reekie: “I just told myself I could do it”[/url] appeared first on [url=https://athleticsweekly.com]AW[/url].
Top
Post Reply
1 post • Page 1 of 1