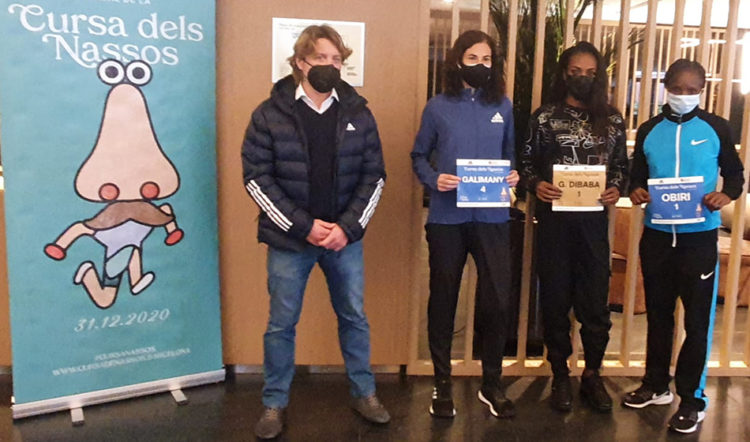 Genzebe Dibaba and Hellen Obiri target world records in Barcelona, while fast times are also on the cards in Madrid and Bolzano Athletes will be hoping to end the year on a high as they take to the roads of Spain and Italy for the traditional New Year’s Eve Cursa dels Nassos in Barcelona, Nationale-Nederlanden San Silvestre Vallecana in Madrid and BoClassic in Bolzano on Thursday (December 31). World 1500m record-holder Genzebe Dibaba and two-time world 5000m champion Hellen Obiri are among those in Cursa dels Nassos action and are set to target the world 5km and 10km records respectively. The official women’s 5km world record for a mixed race is Caroline Kipkirui’s 14:48 from Prague in 2018, while the record for a women-only race is Sifan Hassan’s 14:44 from Monaco last year. The global 10km mark is Joyciline Jepkosgei’s 29:43, which she ran in Prague in 2017. Dibaba, who recently won the Valencia half-marathon in 65:18, ran her 5km best of 14:48 in Carlsbad in 2015, before the distance on the road became a world record event, while Obiri’s 10km PB is 29:59, run on the slightly downhill course in Madrid in 2018. France’s double European under-23 champion Jimmy Gressier is among the entries in both the 5km and 10km, while Carlos Mayo is set to target the Spanish 10km record and Marta Galimany is among the women’s entries. The 5km, which also features Morhad Amdouni and Djilali Bedrani, is taking place as an elite-only event, while there is a restricted mass 10km which will be staggered into three start groups of 333 people. Coronavirus measures mean that the races will be held over a closed 5km circuit along the Barcelona coastline. The action is set to be live streamed below from 3pm UK time.
https://www.youtube.com/embed/R4Ydj1ni4 ... ure=oembed
Over in Madrid, the elite-only San Silvestre Vallecana 10km will see Olympic and world medallist Paul Chelimo go for the US record of 27:48 held jointly by Bernard Lagat and Mark Nenow. The traditional course is not record-eligible but this year’s event will take place on a different 2.5km loop route. The entry list also includes Daniel Simiu Ebenyo and Italian marathon record-holder Eyob Faniel as a late entry, plus Britain’s Jonny Mellor, but he will not be racing having been unable to make the journey to Spain. The women’s event also features some exciting racing in prospect, with world marathon champion Ruth Chepngetich and world half-marathon bronze medallist Yalemzerf Yehualaw among those competing. The women’s race is set to start at 5.30pm UK time (6.30pm local time), with the men’s race an hour later. Estos son algunos de los atletas que veremos mañana volar por Vallecas pic.twitter.com/Vh1BbSdALc — San Silvestre Vallecana (@ssvallecana) [url= 30, 2020[/url] The BoClassic in Italy will also be an elite-only race this year, with two-time world 5000m champion Muktar Edris returning to an event he has previously won on three occasions. He is joined on the entry list by athletes including world fourth-placer Telahun Haile Bekele, Tadese Worku and Olympic and world 1500m medallist Abdelaati Iguider. Racing on home soil, Yeman Crippa is said to have the European 5km record of 13:18 in his sights. The women’s race will be over 10km and the women-only world record of 30:29 could be a target, with world 5000m silver medallist Margaret Kipkemboi joined in the entry lists by 2014 Commonwealth silver medallist Janet Kisa and steeplechaser Norah Jeruto. The women’s race starts at 1.00pm UK time and the men’s at 1.45pm. » For more on the latest athletics news, athletics events coverage and athletics updates, check out the [url=https://athleticsweekly.com/]AW homepage[/url] and our social media channels on [url=https://twitter.com/AthleticsWeekly]Twitter[/url], [url=https://www.facebook.com/athleticsweekly/]Facebook[/url] and [url=https://www.instagram.com/athletics.weekly/]Instagram[/url] The post [url=https://athleticsweekly.com/event-news/athletes-aim-for-fireworks-at-new-years-eve-races-1039939042/]Athletes aim for fireworks at New Year’s Eve races[/url] appeared first on [url=https://athleticsweekly.com]AW[/url].
Top
Post Reply
1 post • Page 1 of 1