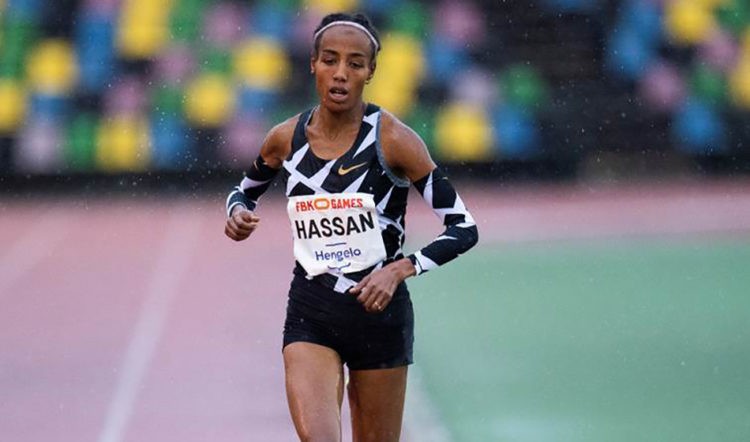 World 1500m and 10,000m champion runs 29:36.67 in the rain to break Paula Radcliffe’s record Sifan Hassan smashed the European 10,000m record at the FBK After Summer Competition in Hengelo on Saturday (October 10), taking more than 24 seconds from Paula Radcliffe’s 18-year-old mark with her time of 29:36.67. Running in similarly wet conditions to those which Radcliffe ran her 30:01.09 in Munich, Netherlands’ Hassan was guided by pacemaker Laura Weightman as well as electronic Wavelight technology and then, running alone, she passed the halfway mark ahead of world record pace, in around 14:37. READ MORE | From the AW archive: Paula Radcliffe’s European 10,000m record in the rain In the challenging conditions the world 1500m and 10,000m champion was not able to maintain the pace and the lights gradually moved away from her, but she continued on for a time which places her fourth on the world all-time list, which is led by Almaz Ayana’s 29:17.45 set at the 2016 Olympic Games. “I am so happy to have run a new European record, especially a record that has stood for so long by such a strong athlete as Paula,” said Hassan, who now prepares for the World Athletics Half Marathon Championships in Gdynia on October 17. “It was a very difficult race today as it was so cold and wet. “I was feeling really strong today and wished for a bit better conditions, but this record gives me a lot of confidence.” Hassan adds this mark to her other European records at 1500m, 3000m, 5000m and the half-marathon as well as her world mile and one-hour records. Tsehay Gemechu placed second in 30:57.73.
https://www.youtube.com/embed/PGuKwPWTX ... ure=oembed
Organised by Global Sports Communication, the meeting also featured a women’s 1000m and men’s 5000m race. After her [url=https://athleticsweekly.com/athletics-news/joshua-cheptegei-world-5000m-record-monaco-1039931539/]2:29.15 in Monaco to come close to the world 1000m record[/url], Faith Kipyegon this time clocked 2:32.82 for victory as Winny Nanyondo was second in 2:40.50. World 10,000m silver medallist Yomif Kejelcha won the 5000m in 13:12.84 ahead of the in-form Stewart McSweyn, who clocked 13:16.05. » For more on the latest athletics news, athletics events coverage and athletics updates, check out the [url=https://athleticsweekly.com/]AW homepage[/url] and our social media channels on [url=https://twitter.com/AthleticsWeekly]Twitter[/url], [url=https://www.facebook.com/athleticsweekly/]Facebook[/url] and [url=https://www.instagram.com/athletics.weekly/]Instagram[/url] The post [url=https://athleticsweekly.com/event-news/sifan-hassan-european-10000m-record-1039936078/]Sifan Hassan smashes European 10,000m record[/url] appeared first on [url=https://athleticsweekly.com]AW[/url].
Top
Post Reply
1 post • Page 1 of 1