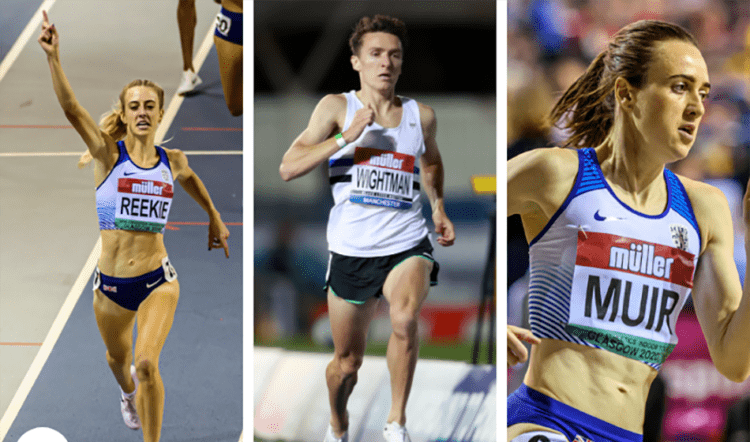 Three-way tie in performer of year category at national governing body’s 4J Studios Annual Awards Laura Muir, Jemma Reekie and Jake Wightman have been jointly named Scottish Athletics’ athlete of the year. The middle-distance runners enjoyed an unprecedented three-way tie for the performer of the year category in the governing body’s 4J Studios Annual Awards. The trio emerged triumphant from an eight-strong short list at the end of a brief yet successful season. The announcement was made on YouTube and they follow in the footsteps of 2019 winner Callum Hawkins. Muir broke the British record for 1000m and set a world lead for 1500m. Reekie led the world indoor 800m rankings with 1:57.91 and excelled during the summer, too, while Wightman set a Scottish 1500m record of 3:29.47. Megan Keith of Inverness Harriers was named under-20 performer of the year after excellent cross country results as Anna Hedley of Fife AC took the under-17 award. Ultra-runner Joasia Zakrzewski was in the short list for the main performer of the year category but she was also named masters athlete of 2020.

Joasia Zakrzewski by Mark Shearman Andy Young, the coach of Muir and Reekie, pipped Geoff Wightman to the performance coach of the year award. Ross Cairns of Inverness Harriers was recognised as development coach of the year. Alan Erikson won the club coach of the year award for his work at Perth Strathtay Harriers. Central AC won the off-track club of the year award, while Bellahouston Road Runners took the title of impact and innovation club of the year. Gregor Malcolm from Edinburgh University Hare and Hounds was named volunteer of the year and Diane Ramsay the official of the year. The innovation award, meanwhile, went to Annan and District AC for their work during lockdown to keep their members connected. “I’d like to congratulate all our athlete winners in the 4J Studios Annual Awards and their coaches,” said Stephen Maguire, director of performance and coaching at Scottish Athletics. “It has been a strange year, of course, and a tough year for so many people in our sport. But we still witnessed Scottish athletes starring on the global stage and the level of some of the performances really was remarkable. “In the end, after a lot of discussions, our awards selection panel felt they simply could not split the achievements of Laura, Jemma and Jake. It was felt that a joint award was the most suitable and fitting outcome and I’m hoping many people will disagree with that.”
https://www.youtube.com/embed/O4VxTvNZc ... ure=oembed
» For more on the latest athletics news, athletics events coverage and athletics updates, check out the [url=https://www.athleticsweekly.com/]AW homepage[/url] and our social media channels on [url=https://twitter.com/AthleticsWeekly]Twitter[/url], [url=https://www.facebook.com/athleticsweekly/]Facebook[/url] and [url=https://www.instagram.com/athletics.weekly/]Instagram[/url] The post [url=https://athleticsweekly.com/athletics-news/muir-reekie-wightman-win-top-scottish-award-1039936092/]Muir, Reekie, Wightman win top Scottish award[/url] appeared first on [url=https://athleticsweekly.com]AW[/url].
Top
Post Reply
1 post • Page 1 of 1