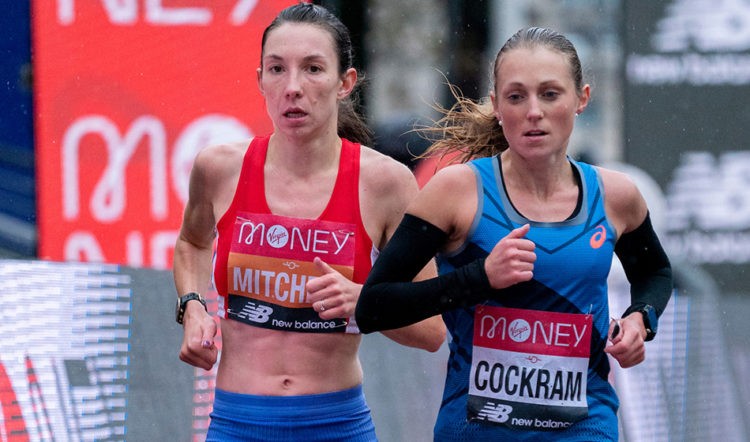 After modest triple jump marks and clambering over steeplechaser barriers at local league level, the Reading runner found herself leading the domestic field in the London Marathon this month Three years ago Naomi Mitchell was a recreational runner who occasionally turned out for her club in events like triple jump and steeplechase. “I’ve run and won three steeplechase events but never actually jumped a steeplechase barrier,” she says. “I’ve just sat on them!” Her triple jump best of 8.19m, set at a Southern Women’s League division two meeting, is the kind of distance that looks more like a long jump mark. “I just did whatever was needed on the day to get the points in,” she remembers. Even in the marathon her first five attempts saw her clock 2:54 (London 2016), 2:53 (London 2017), 2:49 (Berlin 2017), 3:01 (London 2018) and 2:48 (London 2019) before she eventually enjoyed a breakthrough with 2:37:51 in Frankfurt this time last year. Her unexceptional form at an early age was apparent on the country, too, as she placed outside the top 100 at the English Schools Cross Country Championships, while as recently as 2015 she placed a modest 162nd in the Inter-Counties (more than five minutes behind winner Lily Partridge) and 103rd in the British Universities’ Championships (more than four minutes behind winner Emelia Gorecka). Frankfurt 12 months ago was a sign of things to come, though, and in London this month she ran another big PB of 2:33:23 to finish second Briton home behind Natasha Cockram. For a period in the final third of the race, Mitchell was leading by a fair margin as well before Cockram ran her down (see main image above). “It’s surreal because going into London I was the slowest seeded runner and I had my own expectations,” Mitchell says. “In terms of the time I ran, it was about what I anticipated and if the weather wasn’t so horrible then I might have gone a bit quicker.” 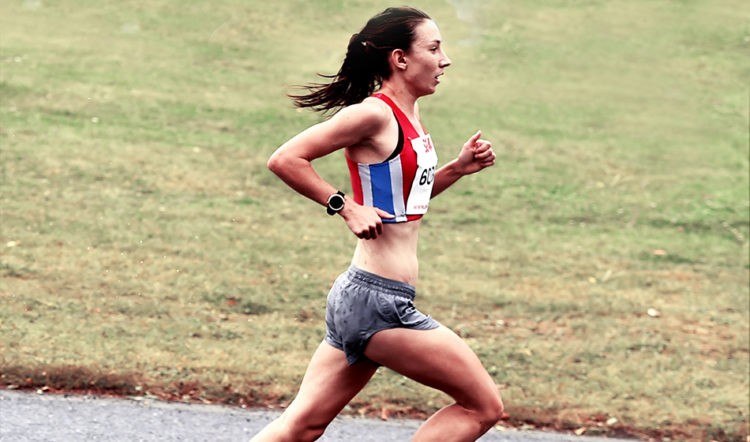 Naomi Mitchell by Mark Shearman Based in Reading, she has worked for the past seven years for KPMG as an accountant and does some of her steady running around the Berkshire countryside with her husband, Jonnie, who also, like her, works at home right now as a hairdresser. Every Tuesday she heads to Winchester to do a harder workout under the supervision of coach Nick Anderson. It is a routine that is working for her and is far removed from the two or three runs a week that she used to consider sufficient until about three years ago. “Running has always been something I’ve been passionate about but I don’t come from a super-sporty family so going down the track once or twice a week to do a session seemed like quite a lot to begin with,” explains Mitchell, who turns 27 next month. “The whole reason I took up the marathon was because I was on the borderline of quitting because I had my job with quite tough hours and my running wasn’t really going anywhere and I thought ‘this might be something I just do for fun now’. “I had a few friends who were running well with their full-time work so I thought ‘if I do a marathon then I have to train properly for it’ and I’m pleased I’d made that decision now.” She continues: “When I was younger I hated the track. But even then I would always pick the longest distance. After I turned 17 I ran a couple of half-marathons for fun and began to just about get the times to get into championship races. “For my first couple of marathons I was just training Tuesday and Thursday and adding a long run at the weekend but I had a series of marathons where I was not really improving but I knew from my training that there was more there but didn’t know how to tap into it.” At that point she sought advice from coach Rob McKim from her club Reading AC and then hooked up with Anderson after meeting him at an England Athletics camp. On London, she says: “It gave me a lot of confidence. I feel like there’s more to give and if I can get into a race with the Olympic qualifying pace then with another six months or year I think I can definitely stick on that pace.” Such was her modest PB going into London, she had to push to get a place on the start line too. Once successful she then found herself in a hotel with Brigid Kosgei, Eliud Kipchoge and Mo Farah. “It was pretty intimidating to be honest and a little bit nerve wracking when you’re in the lunch queue book-ended by world record-holders. “But it was a great experience and good to do the race and execute it well and know that’s where I can be and, in the next one, I’ll hopefully have the confidence around the hotel to know that I belong there.”
https://www.youtube.com/embed/dKZzpDzUZ ... ure=oembed
» See the November issue of AW magazine for a feature on Naomi Mitchell and Natasha Cockram plus much more » For more on the latest athletics news, athletics events coverage and athletics updates, check out the [url=https://athleticsweekly.com/]AW homepage[/url] and our social media channels on [url=https://twitter.com/AthleticsWeekly]Twitter[/url], [url=https://www.facebook.com/athleticsweekly/]Facebook[/url] and [url=https://www.instagram.com/athletics.weekly/]Instagram[/url] The post [url=https://athleticsweekly.com/interviews/naomi-mitchell-eye-catching-marathon-progress-1039936255/]Naomi Mitchell’s eye-catching marathon progress[/url] appeared first on [url=https://athleticsweekly.com]AW[/url].
Top
Post Reply
1 post • Page 1 of 1